As you may know we believe in supporting our players through an active presence on Facebook and other fora. We also maintain a blog for each of our games. As you can imagine this is very time consuming, time we could use for writing new material.
Also, by having separate blogs for each game players do not get to see what else is going on in our range of games. This is a shame as all three games use the same core engine so players may find skills, powers, beasts and equipment from the others that they can adapt to their own games.

So we have decided to bring all of our games onto a single blog called, appropriately, The Ministry of Gentlemanly Warfare. You can find it here: https://theministryofgentlemanlywarfare.wordpress.com/

The current blogs shall not be deleted. There are hundreds of articles, battle reports, tutorials, pieces of fiction and other materials on them we do no want to lose. But they shall no longer be deleted.

Most of the additional/bonus materials we have placed on these blogs has been ported across to the new blog, where each game has its own page. Additionally we shall be combing through the original blogs an extracting all the useful articles, dropping them into PDF then placing them in the games pages of the new blog.

If you are a regular reader or follower of the original blogs we hope you will now transfer your allegiance to the new.

Well, later today we begin the long trek from Mid-Wales to Falkirk in Scotland. Google tells me it will take six hours, but they have not met the official Ministry driver – Lorna, my wife.

There shall be 30 + Clubs Presenting Demonstration & Public Participation Games, 40+ Traders, a Flea Market and a Bring & Buy.
Adults are £2.50 and Concessions £1.50
More details at: http://www.falkirkwargamesclub.org.uk/Carronade/Carronade_Home.html

I am so looking forwards to seeing all you Scots, Picts, Highlanders, Lowlanders and even any English who can get their passports stamped by Nicola Sturgeon 😉

I shall be presenting and running Blood Eagle participation games all day, as well as flogging copies of that and Daisho if any of you are interested.

A report and pictures shall be forthcoming, you have my word on that.

For the Daishō participation game at Salute 2016, Charles laboured  upon a brand new reference sheets and a set of figure cards. These can be seen in use below.

You can now find these in the bonus material section of this blog. 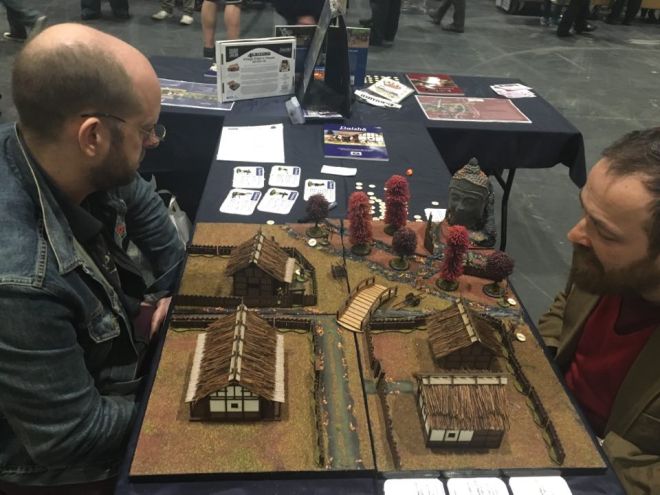 A little after dawn o’clock Charles, Lorna and I departed our secret lair in the leafy suburbs of Surrey in a car laden to the rafters with our equipment. The M25 was eerily quiet, like in a post-apocalypse movie and the mood in the car was subdued. It was silently agreed that there is not enough caffeine for this time in the morning.

By the time we reached the Docks the world had woken up and it was time to get our war faces on.

As we have found before the Warlords team are cheery, helpful and, above all, efficient. The car was in and out of the hall in under five minutes and, while Charles went to stable it, we set about unpacking and getting ready.

We were soon joined by our friend Matt and the serious business of assembling Billy’s latest masterpiece – a cemetery in old Budapest – was accomplished.

The Ministry of Gentlemanly Warfare had been planning for Salute for several months. Charles’ organisation and checksheets ensured that nothing was forgotten and, that everything was in its assigned place.

The set-up included:
1. The village of Kattegat from the TV series ‘Vikings’, for Blood Eagle, 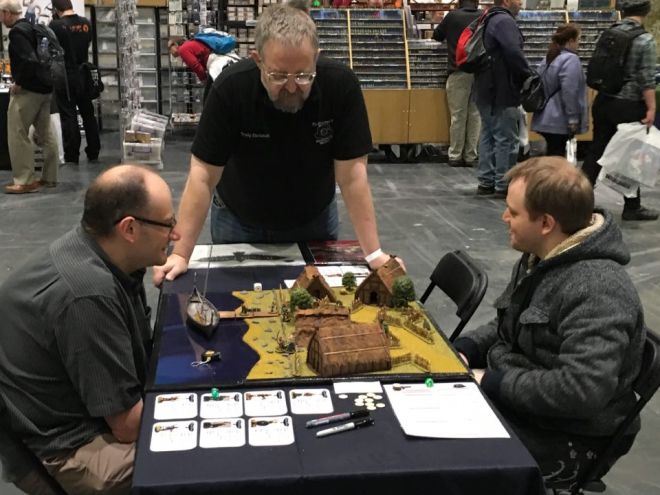 2. The Shrine of Dog-e-bite for Daisho, and 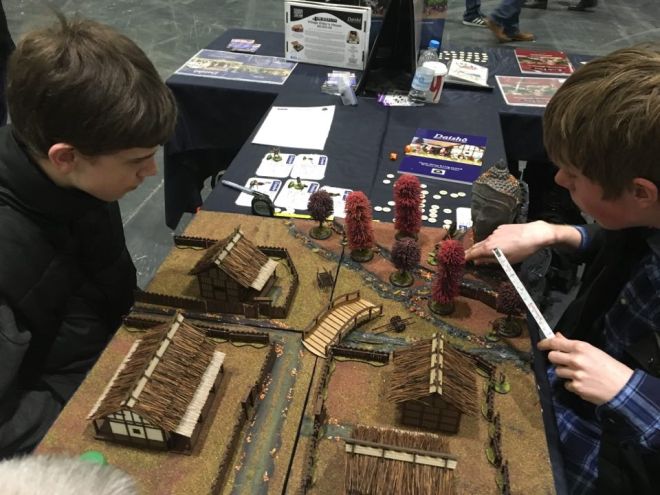 3. The old cemetery in Budapest for IHMN Gothic. 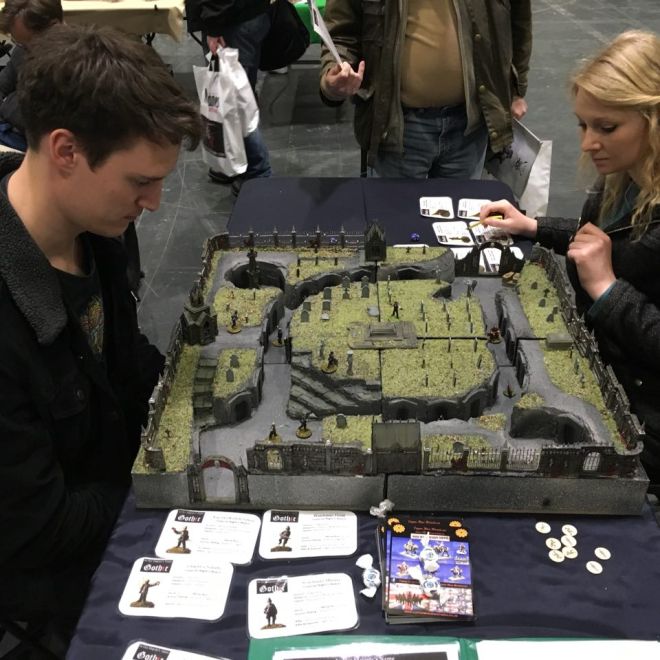 Three battlefields, three masters of the games (cough) and our Maitre ‘D, Lorna on front of house.

We stood back to admire our work but only had moments before the starting gun was fired and the horde descended upon us.

Over the next seven hours, we ran at least nine games of Blood Eagle, seven of Daisho and six of IHMN Gothic. This may not seem much until you realise that each game took 30-45 minutes, required us to instruct and entertain forty-four people from eight to seventy years old, in a hall with the acoustics of an aircraft hanger and several thousand people in. 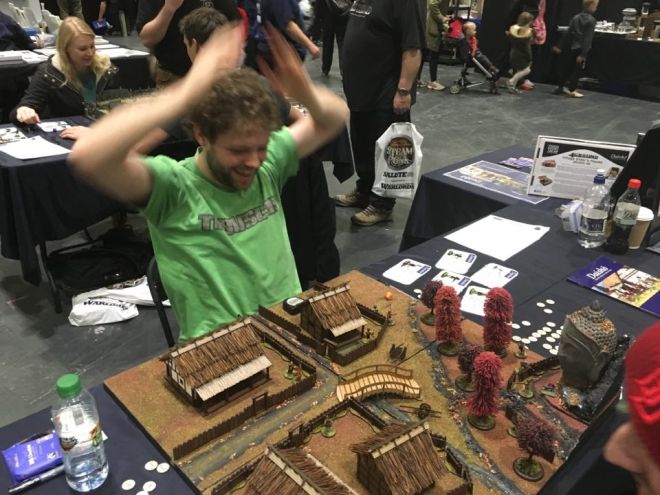 Some players were already aficionados of IHMN but most were playing their first games. The preparation we put into the figure cards and reference sheets really paid off here, making it much easier for people to get their heads around the rules. In most games people were up and running by the end of turn two, and everyone seemed to have a great time. Indeed, some of those manning adjacent tables were rolling their eyes at the amount of laughter and shouting going on in our small portion of the arena.

As before the youngsters and the non-gamer partners really gave their regular gamer parents/friends a good run for their money. Every battle was closely fought with many going to the wire. We still had people playing when the Warlords began gently ushering everyone out.

There were so many other excellent ladies and gentlemen who stopped by to chat, ask about the games and even ask us to sign their copies of the books. This, I assured them, would double the value of the books should we suddenly and tragically die. 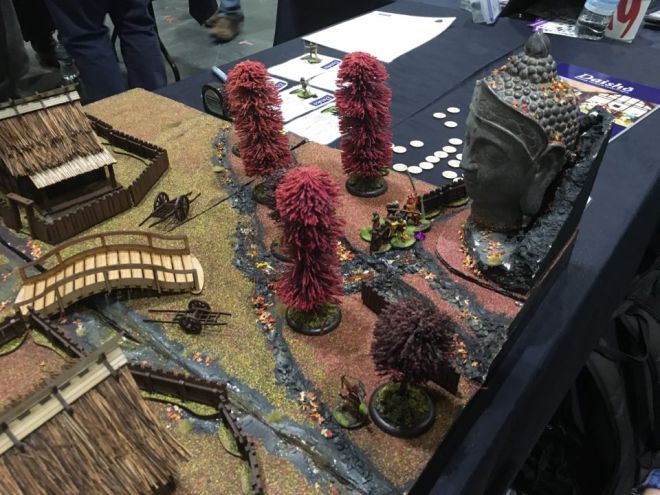 Each of us managed to get a few minutes away during the day and do a quick walkabout. I must admit mine was a bit of a whistlestop as I rushed between the stalls selling Blood Eagle. Two fo the three sold out by lunchtime and even Northstar only had a handful left by close of play. I did not see much in the way of steampunk going on despite the theme, but that is more because I was rushing than any actual lack.

We eventually made it back to the lair around seven and collapsed to partake of too much pizza and wine. Despite feeling like beaten men we agreed that we’re coming back next year.

So a heartfelt thanks to all of you who managed to make it to Salute and say hello to us. It means a lot to us talking face to face with players. To those that didn’t we hope that this report and the photos, help give you an idea of what a frenetic and wonderful experience it is.

Ladies, Gentlemen and you at the back.

I have been up since oh-six-hundred printing, cutting, laminating, packing, checking the checklist Charles thoughtfully sent me because he knows me so well, breathing in and out of a small brown paper bag, rechecking, repacking and drinking numerous level 6 coffees.

This afternoon we shall journey down to Murton Towers arriving in time for the time-honoured pizza and wine. What you might not know is that we live a good four hours drive from one another and that 95% of our writing and collaboration is done through the auspices of the worldwide web.

We have one full participation game prepared for Blood Eagle, for Daisho and, for IHMN Gothic. Thus, we could be running three games and six gamers simultaneously. So please be patient with us if you have a question to ask or rulebook to sign.

My ever-patient wife Lorna shall also be on hand to assist you, a task she performed admirably at Vapnartak in York a few weeks ago.

We shall be on table GF17 so if you do not have a map to hand, proceed directly from the main doors to the centre of the hall and turn right. We are down that alley on the left. You shall be able to recognise us through our natty black polos bearing the Ministry of Gentlemanly Warfare logo fore and aft. 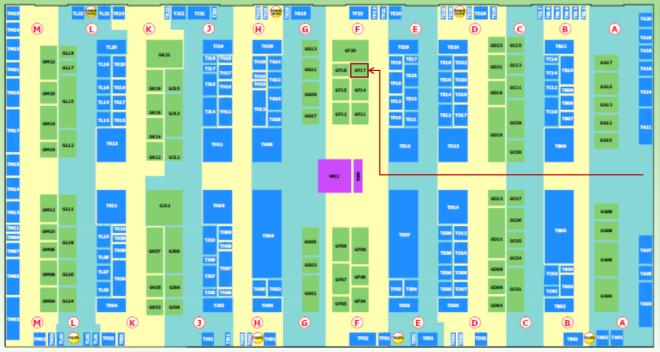 We look forwards to putting faces to all of you who have corresponded with us about our games over the last year and hope you find the time to drop by and say hello.

Just a short post to commend to you our latest production based on the IHMN core rules – Blood Eagle, skirmish warfare in the legendary Dark Ages. You can find out more about it here: https://bloodeagleskirmish.wordpress.com/ 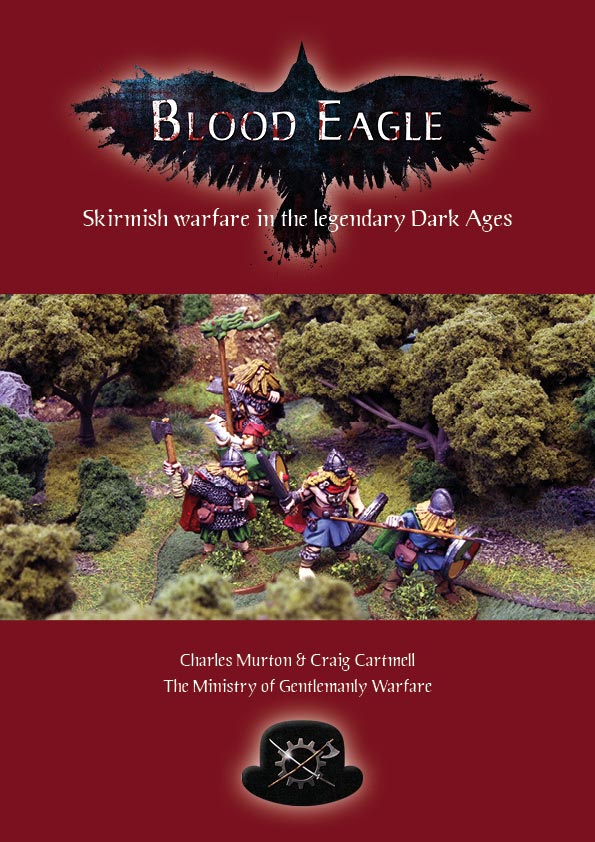 Charles and I, along with our glamorous assistants, shall be attending this year’s show.
We’ll be running participation games of Daisho on two boards for you to come along and try.
We shall also be happy to talk to people about In Her Majesty’s Name and its future, as well as our upcoming project – Blood Eagle.
Look for the team with the natty black polo shirts bearing the Ministry of Gentlemanly Warfare bowler hat logo. 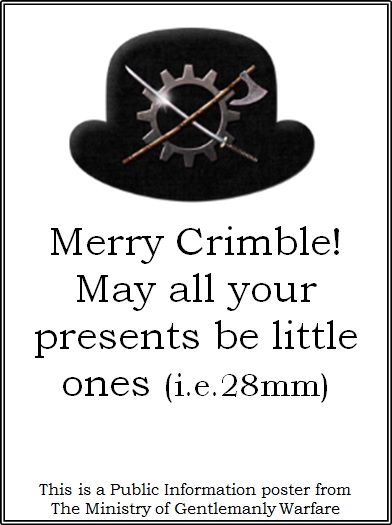 At Salute 2015 we launched Daisho with a pair of display games. Mine was well documented and there are plenty of photos of it on this blog.

The other was by our good friend Billy Harrington, the stalwart chap who actually came in Japanese dress to the show. Well, last week he and Charles had a game over that show board, so it seemed like a great opportunity to get some close-up of his astounding work. 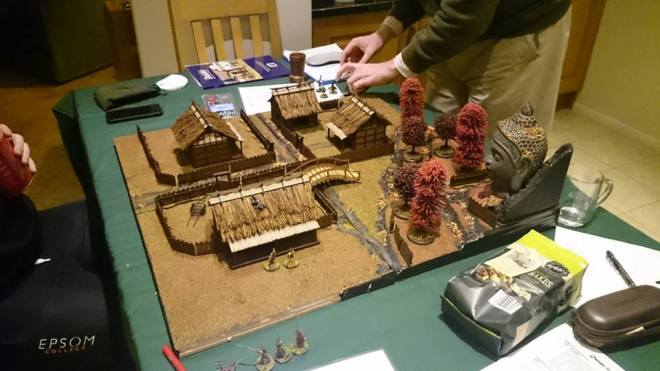 Here is the complete board on Charles table. The following are close-up of the battles between samurai and ninja buntai. All the buildings are from 4Ground’s Shogunate/Daisho range. 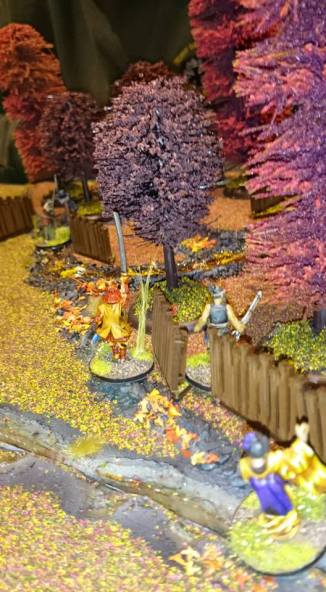 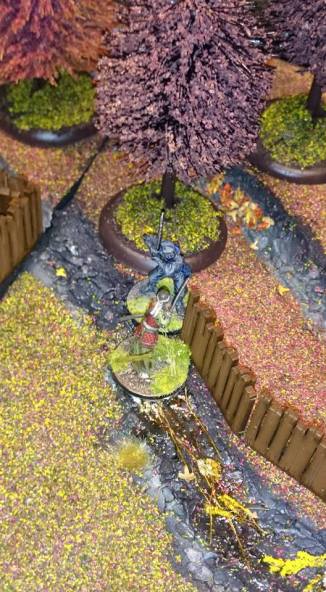 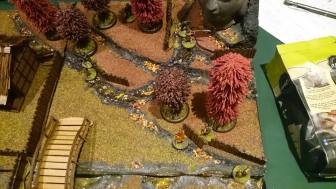 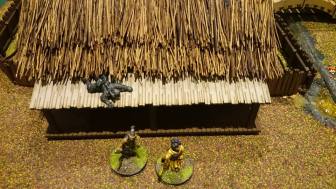 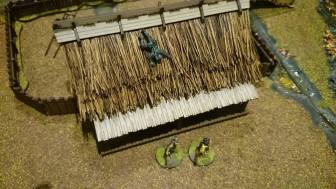 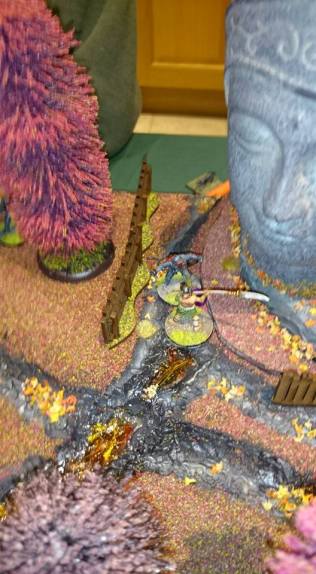 After months of development between the excellent chaps at 4Ground and our good selves, we are proud to announce that you can now purchase a set of Laser-cut MDF counters for use with our games. 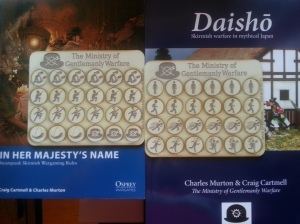 You can find a guide to what each counter stands for on the Bonus Material page of this blog.

If you would like to purchase a set our friends at Northstar are now selling them here: http://northstarfigures.com/prod.php?prod=7786